THE SCARLET CATERPILLARCLUB AND OTHER INSECT KILLING FUNGI

The Scarlet Caterpillarclub (Cordyceps militaris) is a fungus that is occasionally seen in short grasslands as a reddish/orange club about one or two inches high. 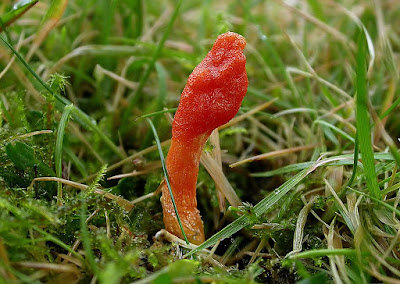 This one was found by local naturalist Steve Blacksmith in a private garden at Savile Park. Photo taken on Nov. 26th 2012.


It is because of it's fascinating life history that I've included it on this site - it uses moth larvae and pupae as its host. They are also said to use butterfly larvae and pupae as well but I'm not aware of any butterfly larvae in the UK that pupate in the soil.
LIFE CYCLE: It seems that the wind blown spores simply land on the larva and begin to germinate producing hyphal strings. They then penetrate the skin and begin to devour the larva's insides eventually replacing them with fungal mycelium. At this stage I'm not sure whether the larva naturally digs down in to the earth to pupate or whether the fungus instructs it to do so much the same way infected ants will unaturally ascend trees and vegetation to an exposed location to give the fungus a high vantage point in which to release the spores.
When mature the fungus throws out the distinctive fruitbody which emerges above ground. The swollen, dimpled upperpart of the club is the fertile area that releases the spores. 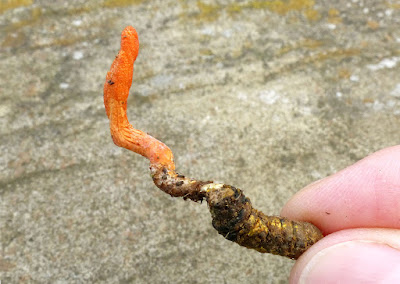 Here's one I dug up on a Halifax Scientific Society fungi foray to Gosport Clough on Oct. 20th 2018. The moth larva is still intact and fairly recognisable as such. 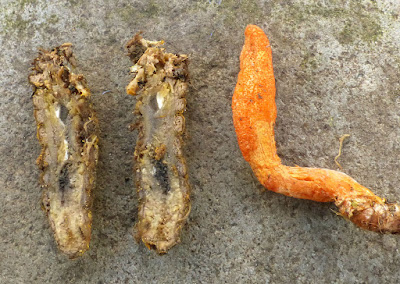 The above larva dissected showing the solid pack of mycelium inside. 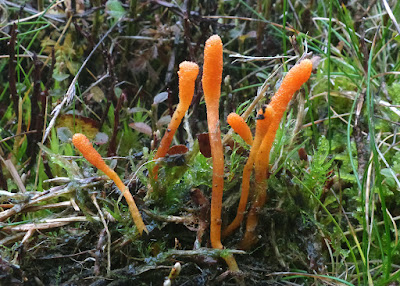 There maybe several fruitbodies to one fungus as shown in the specimen from Broadhead Clough on Nov. 1st 2019. 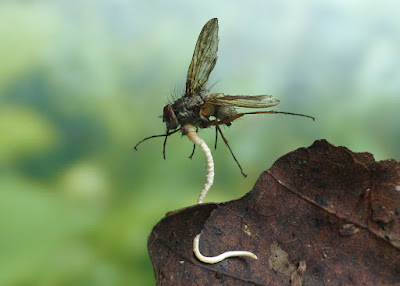 Another fungus that infects and kills insects is this Yellow Waspclub (Ophiocordyceps ditmarii) which was found at Broadhead Clough on Sept. 23rd 2021. This is an immature specimen, eventually the stem will lengthen and form a bulbous end where the spores are formed, this usually pokes out from the substrate to allow spore dispersal. It is thought that once infected the fly is manipulated by the fungus to burrow down in to the leaf litter where the humidity is higher thereby aiding the fungal growth. 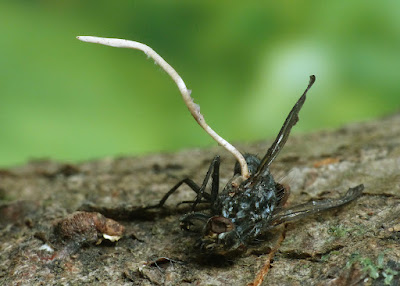 Here's another example from the same day. Searching through leaf litter or mosses is the best way to find them. All the local examples I've seen are on flies. 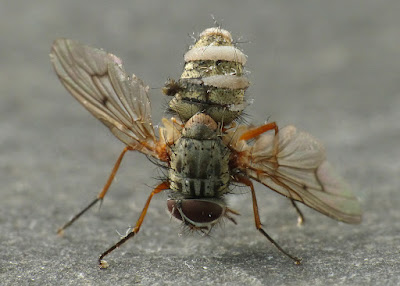 This fungus which you can see growing between the abdominal segments is probably  Entomophthora muscae or a closely related species. This was one of several dead flies found together on a tree trunk at Carr Hall Lane, Stainland on Sept. 1st 2021. Once infected the fly dies within a few days. The fungus grows in to the brain affecting the fly's behaviour which makes it land, crawl upwards, straighten its hindlegs and open its wings giving the spores maximum chance for dispersal. They will then land on any nearby flies to start the process over again. 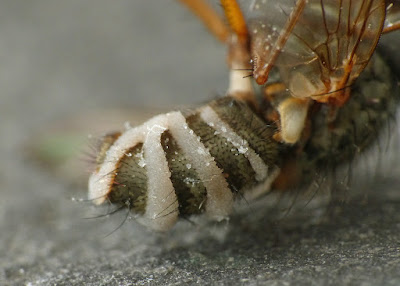 A view of the underside of the abdomen.