With more than 5,500 species of parasitic wasps in Britain, many of which play a significant role in the life cycles of moths and butterflies, I thought it only right to devote an entire post to them. Many have life cycles more fascinating, complex and bizarre than their hosts, but despite this, they remain a very under studied group of insects with a very large majority of species having nothing known about their host associations.

Below is a sample of some of the encounters I’ve had with them during my few years of rearing moths. 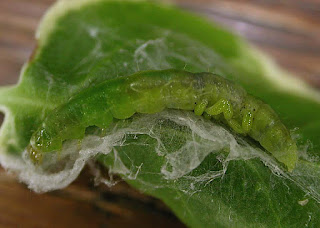 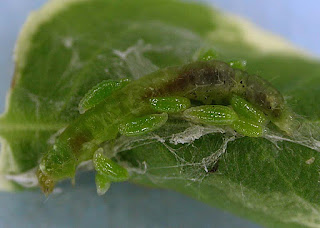 A day later and the grubs have greatly increased in size. Usually they keep the host alive as long as possible by feeding on none essential tissue like body fat and reproductive organs. 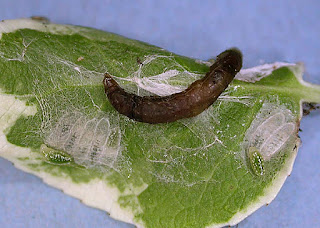 Another 24 hours on and the moth larva is nothing more than a discarded shell. Having now become fully grown seven of the grubs have already pupated in whitish cocoons with two more about to do so. 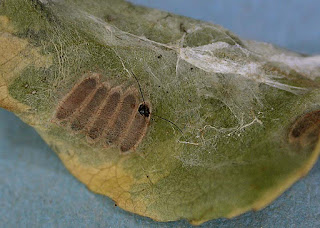 13 days later and the twitching of antennae herald the emergence of the adult wasp. 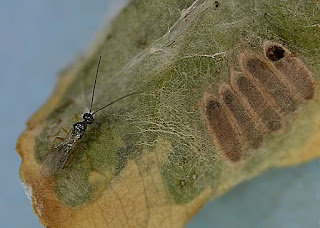 This wasp has subsequently been ID-ed by Mark Shaw as an Oncophanes species, presumably minuta. 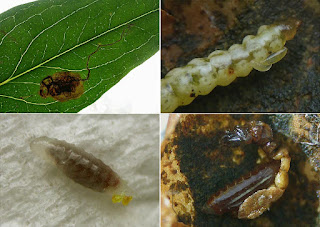 Clockwise:
1. Day one - Aug. 5th 2012. The mine is on cultivated hypericum found just a couple of gardens away.
2. The moth larva with two ectoparasitoids gently sucking the life out of it.
3. Day four and one of the parasitoids has "disappeared" whilst the other has grown enormously. The host is little more than an empty skin.
4. Day eight and the fully fed grub is a translucent bag of waste products. 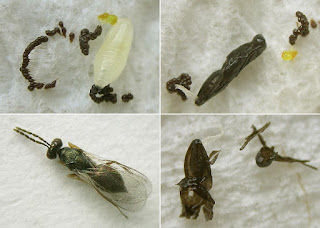 5. Day nine and the gut has been emptied with an unordinate amount waste matter strewn about.
6. Amazingly, two days later and a jet black pupa emerges from the white pre-pupal grub.
7. Eight days after pupating the wasp emerges leaving behind the empty pupal case.
8. It's the chalcid wasp - Pnigalio soemius with a body length of 2mm. Thanks to Dick Askew for identifying it. It will be sent off to him to so he can place it in the appropriate reference collection. 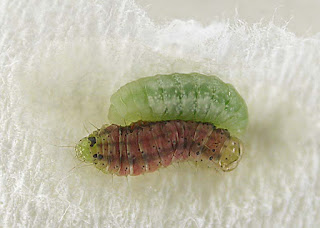 June 19th 2010. The Agonopterix heracliana larva (lower) was found spun up on Hogweed at Long wood. The braconid wasp grub (top) had been feeding internally up until now but as the moth larva nears pupation (it begins to take on a pinkish tint) the larva exits its host and finishes off by feeding externally. Thanks again to Mark Shaw for this fascinating insight. 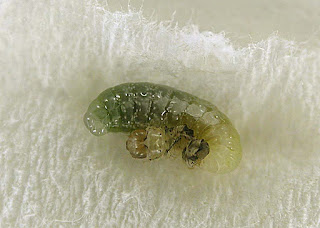 Just over 5 hours later and the moth larva is reduced to nothing more than a head capsule and skin - the wasp grub is ready to pupate. 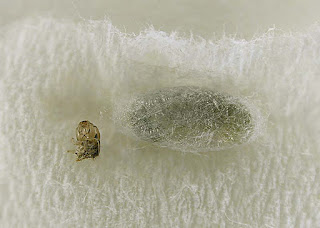 By the next morning a cocoon had been spun and pupation is on the way. Not fussy about any particular site to pupate in, it has spun up right next to the moth's larval remains. 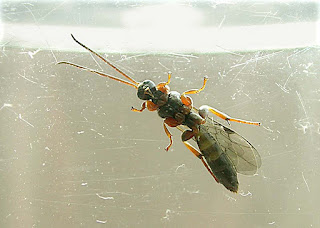 Just four days later and this adult wasp appeared. Subsequent information has come to light indicating that the wasp illustrated should have emerged from a moth pupa and taken much longer than the four days stated, also it is from the wrong family associated with initial wasp larva. This means that it has almost certainly emerged from an unseen moth pupa in the rearing jar - perhaps from a larva that pupated between two layers of tissue paper.

UPDATE: It appears the wasp belongs to the Genus Triclistus, Family Ichneumonidae, Subfamily Metopiinae. Thanks to Pier Moustapha for the info (see comments below).
PHYLLONORYCTER OXYACANTHAE AND WASP PUPAE 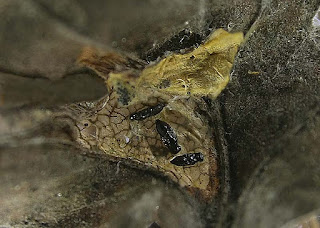 Feb.23rd 2010. A Phyllonorycter oxyacanthae mine on Hawthorn found at New Lane the previous Autumn. The opened mine contains not one but three parasitic wasp pupae. I normally expect no more than one per mine at most so three was quite unusual. 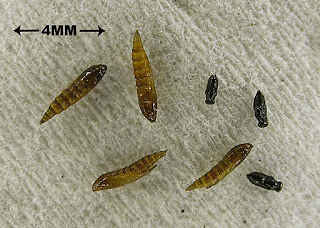 Feb.27th 2010. The three wasp pupae removed from their mine to be reared through along side four oxyacanthae pupae from other mines. Not surprisingly with three wasp grubs to one host they are considerably smaller. 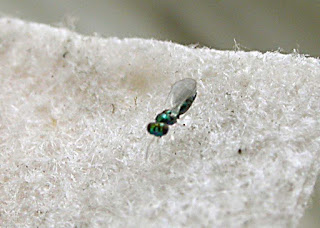 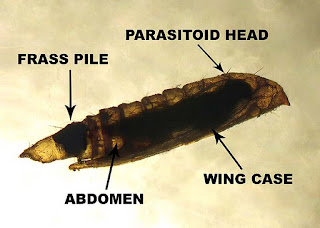 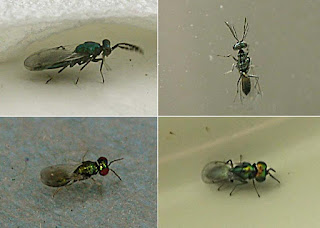 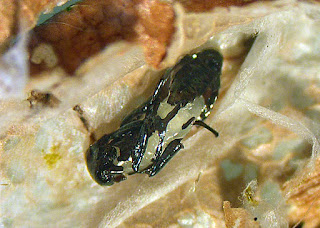 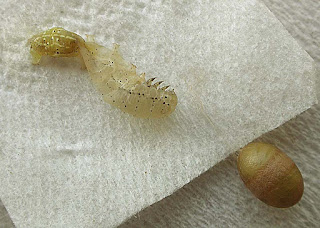 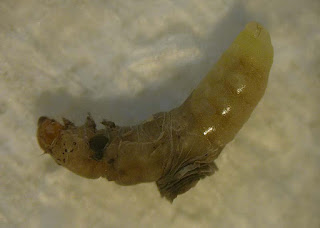 May 19th 2012: Caught in the act. This parasitic wasp grub was observed breaking out of a much prized Bucculatrix nigricomella larva. 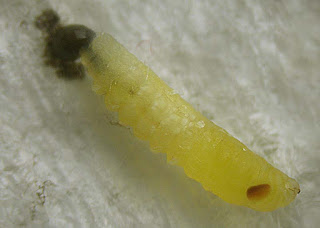 The grub emitting an inky black liquid - perhaps emptying its gut contents as moth larvae do prior to pupation. 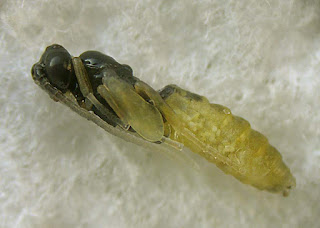 Pupation successful and the typically frail, exarate pupal case seems nothing more than a transparent second skin the day before emergence. 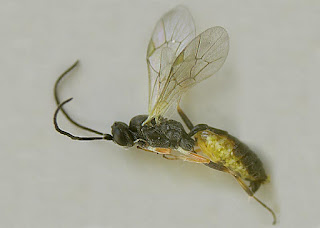 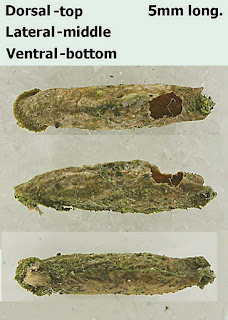 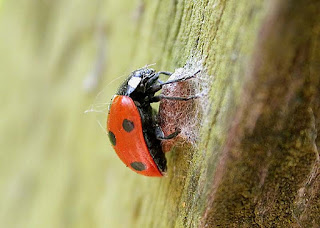 7-Spot Ladybird, Skicroat Green allotments, summer 07.
Not moths but along the same lines. This ladybird has been parasitised by the braconid wasp Perilitus coccinellae and to explain exactly what has happened I've taken this extract from Chris Raper's web page.

"The wasp stalks a suitable ladybird before thrusting its ovipositor between the host's abdominal plates and laying a single egg inside. When the egg hatches the first job for the larva is to eliminate any competition. It is equipped with large, pointed mandibles and it uses these to stab other parasitoid eggs and larvae. Soon after this is will shed its skin revealing mouthparts suitable for eating the host. During development the larva takes very great care not to eat any of the ladybird's vital organs - in fact it seems to limit itself to the ladybird's fat store and gonads. When it is ready to pupate, it uses its mandibles to cut each of the six motor-neurones that control movement in the ladybird's legs before breaking out of the host's abdomen and spins a cocoon between the host's legs. This may seem strange behaviour but the wasp actually wants the ladybird to stand sentry over the cocoon. The ladybird can't move but it is still alive so the bright warning colours and reflex bleeding that once protected the ladybird from predators will now protect the wasp. Eventually the wasp hatches and flies off to find another ladybird leaving the host to starve".

The link to his page is here: http://chrisraper.org.uk/Html/parasitica.htm#someselected

Did you send the Sirtetes robustus record to Bill Ely (YNU Recorder)?

Has the adult emerged yet? I have a pupa over-wintering in the garden.

Hi Derek,good to hear from you again.I tentatively ID-ed it as S.robustus from a post on your blog if memory serves me correctly so I could be wrong - it just looked a good match bearing in mind the host.Much as I like parasitica I don't often have the time or enthusiasm to rear them through so this one was binned pretty quickly!

Excellent page, Charlie. Parasitoids intrigue me as well, and I do a bit of rearing and try to get id's for them.

I recorded some relationships on sawfly larvae here:

Hi Stuart,
Always great to hear from a fellow parasitica enthusiast. Thanks for reminding me how fascinating these insects are, there's so much more to be discovered about them in all aspects of their lives.
I've bookmarked your blog and will popping in from time to time, as with most blogs similar to yours I'm sure I'll learn plenty and pick up many hints and tips along the way.

Keep up the great work,

Hi,
looking at the pictures in the post about AN ENDO/ECTOPARASITOID AND AGONOPTERIX HERACLIANA, it seems that the imago of the emerged parasitoids shoul be a species belonging to the genus Triclistus (Fam. Ichneumonidae subfam Metopiinae).
Pier

Thanks for the info, I've updated the post and can now do a little research on the wasp.

Hi Charlie , I collected some parsnip moth pupal cases from inside hogweed stems recently.
One became a parsnip moth the other black 1cm ichneumon wasps.
Would the wasps be laid on(or in) the eggs , larvae or pupae of the moths.
I suspect injected into the larvae while they are small and still on the hogweed flowers ?
Many thanks
George Hogg

Hi George, like yourself I would have thought they lay their eggs in to the larvae but I suppose it depends on which species is involved. It would be quite a difficult habit to observe in the wild I should think. Definitely a question for a wasp expert.

Many thanks Charlie , The whole thing is as fascinating as it is complicated !
As well as moth pupal cases infected with ichneumon larvae there was a moth larvae infected by Copidosoma wasp larvae . Of all the sample only one moth made it to adulthood !