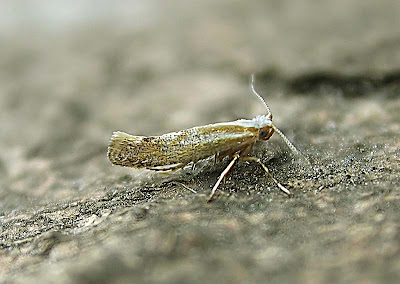 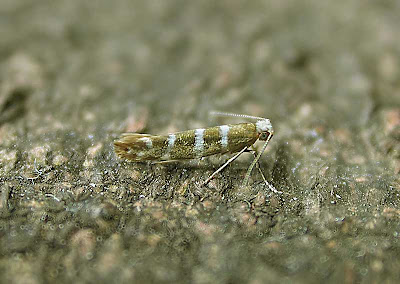 20.005 Triple-barred Argent (Argyresthia trifasciata) in the garden, May 8th 2011. Captured in the early morning. My first record was also in the garden on June 23rd 06 where individuals have been seen a handful of times since. 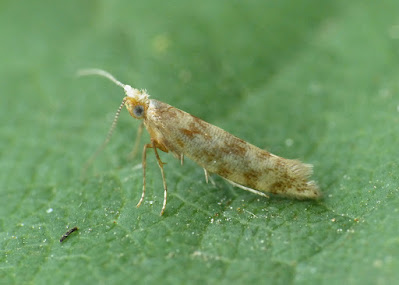 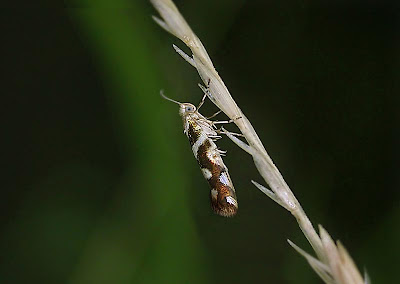 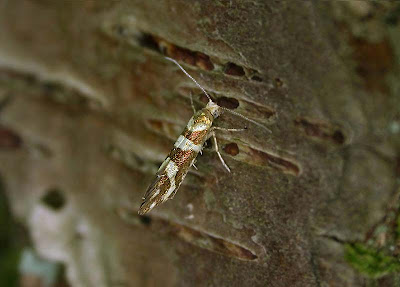 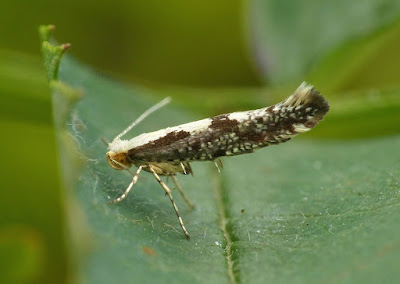 20.019 Apple Fruit Moth (Argyresthia conjugella) at Norland Bilberry Slopes, June 28th 2018. A field observation. Practically every Rowan tree on the site had several of these either resting on the leaves or were easily disturbed by gently tapping the branches. 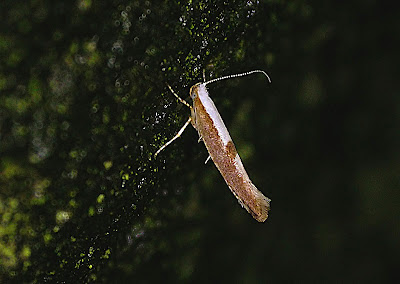 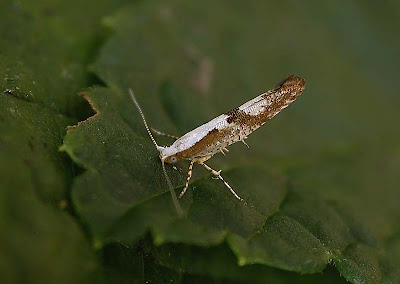 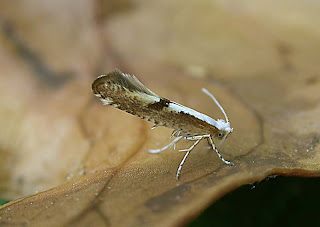 20.022 Hawthorn Argent (Argyresthia bonnetella), May 31st 2010. Reared from a larva spun up in Hawthorn near Sterne Mill bridge. 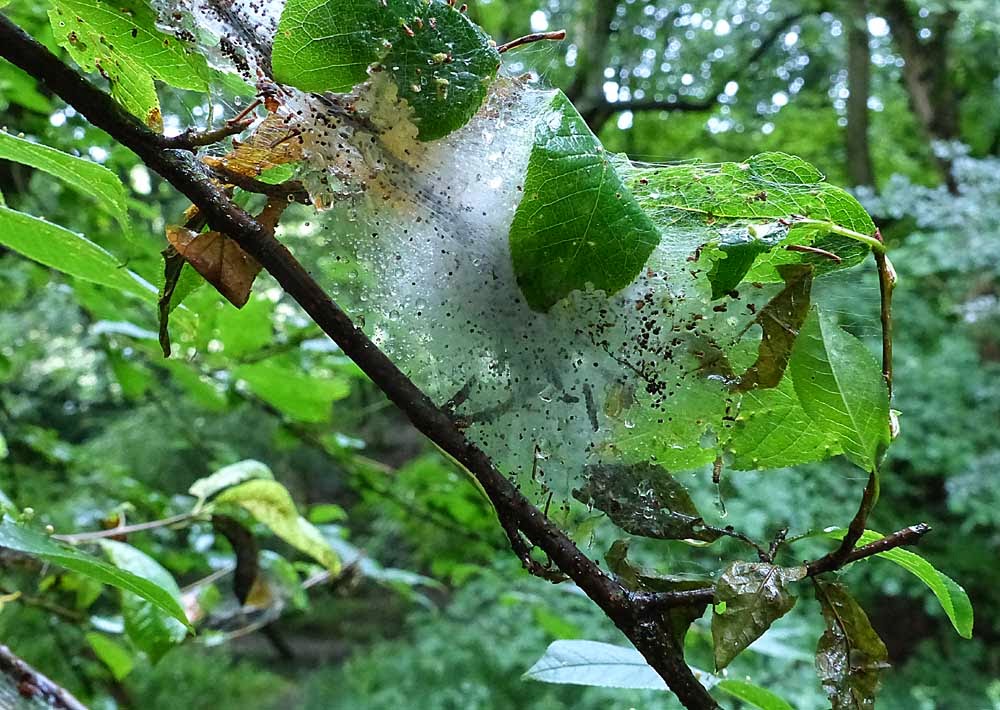 16.001 Bird-cherry Ermine (Yponomeuta evonymella) nest, Cunnery wood, July 5th 2014, originally found by Chris Sutcliffe. I decided to take this nest home to determine the species as there was some uncertainty about the tree's identity. With just a couple of larvae present I thought it shouldn't be too much of a handful! 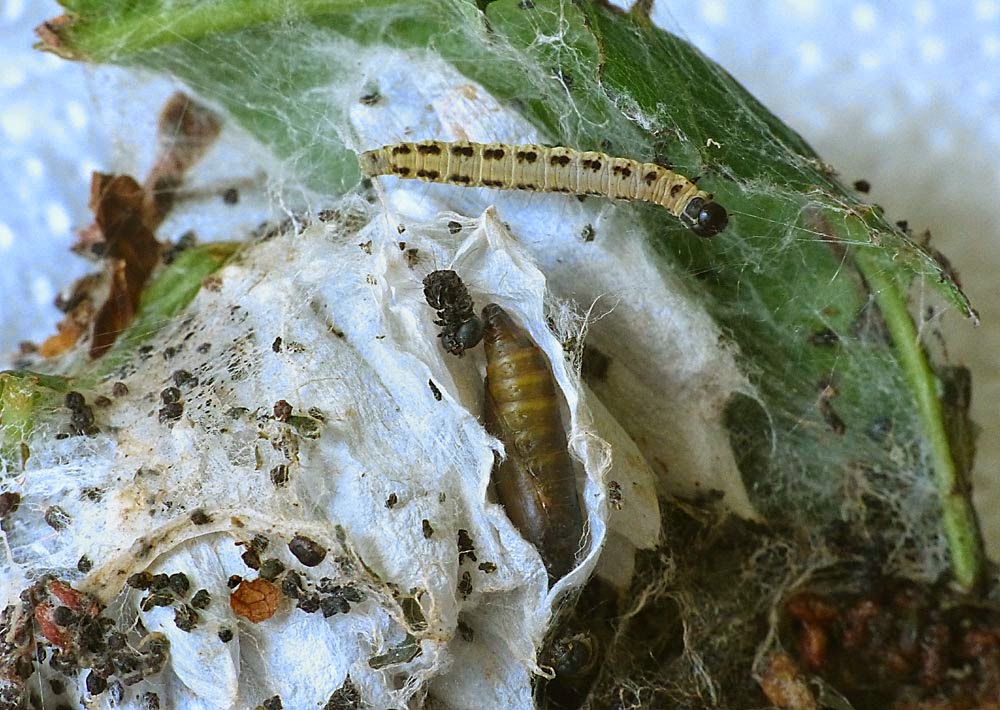 16.001 Bird-cherry Ermine  (Yponomeuta evonymella) larva, pupa and pupal cocoons, July 5th. After opening up the nest I soon realised there was a central nucleus of many pupal cocoons. Opening one up revealed a healthy moth pupa, all bodes well. 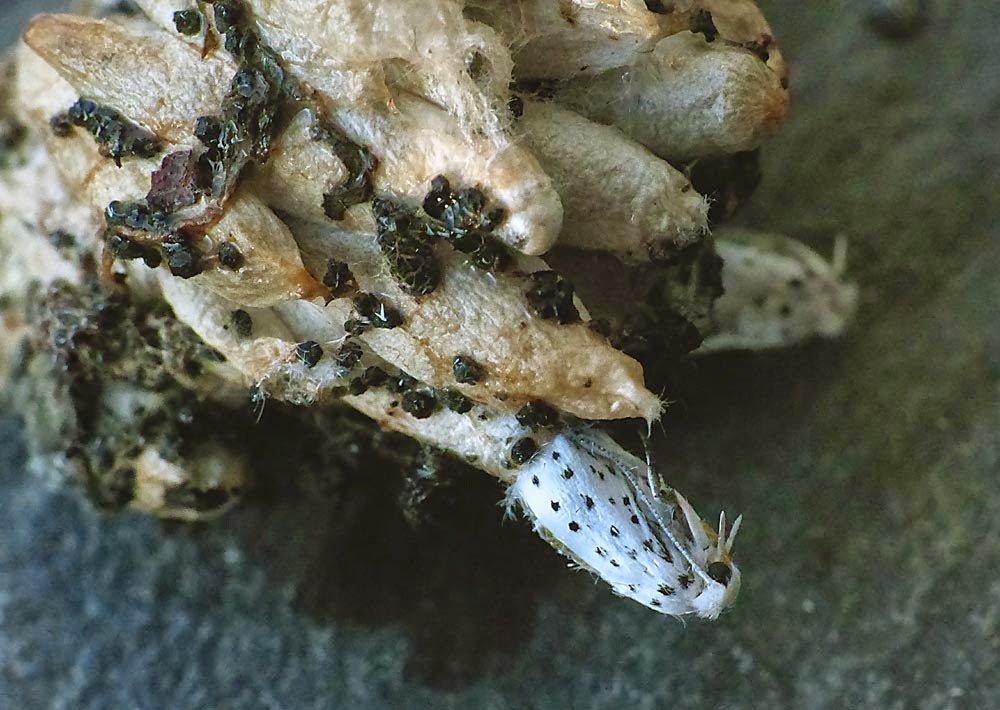 16.001 Bird-cherry Ermines  (Yponomeuta evonymella) emerging July 9th 2014. Three days later I was pleased that two adults had already emerged, but that didn't prepare me for the events of the following day when there was a constant stream of nearly 30 adults emerging from the pupal hub. They were everywhere in differing stages of drying off. It was all a bit overwhelming so out they all went in to a sheltered corner of the garden where they were left to their own devices. 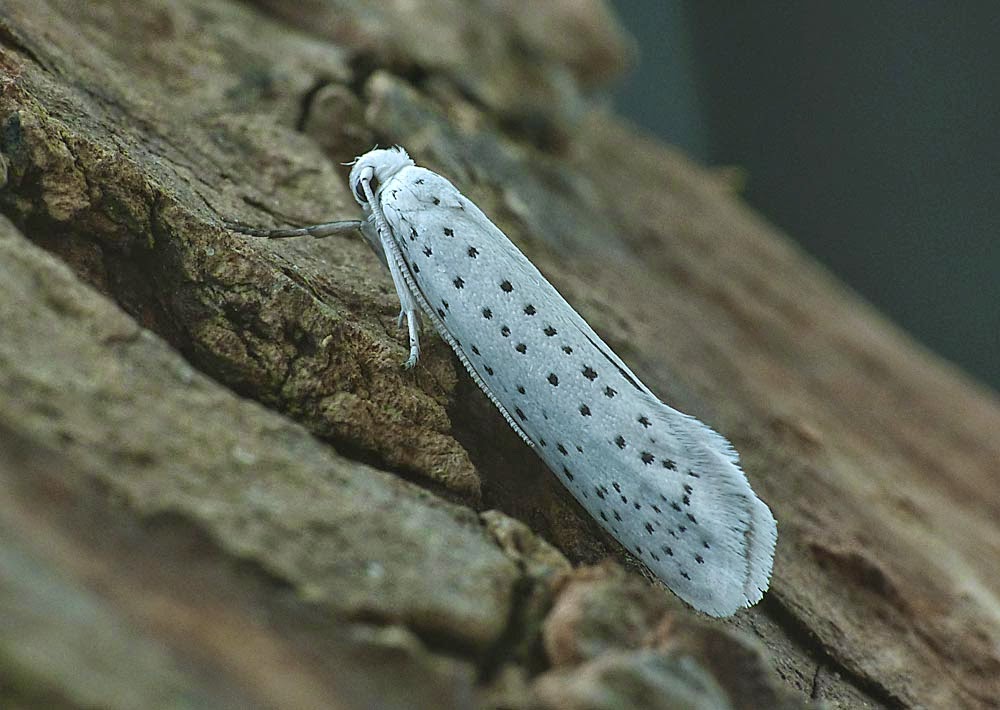 16.001 Bird-cherry Ermine  (Yponomeuta evonymella) July 9th. The host tree was originally identified as a willow species but after the moths started to emerge it was soon clear that it could only be a Bird Cherry. 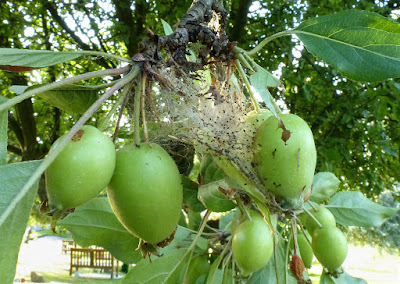 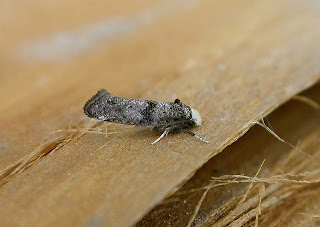 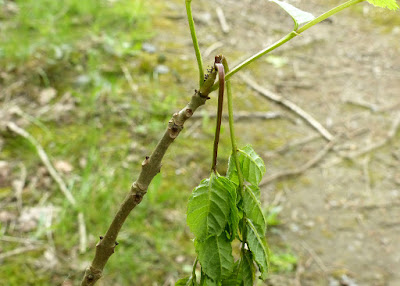 22.002 Ash Bud Moth (Prays fraxinella), feeding signs on Ash at Exley Bank wood, May 1st 2019. Note the withered shoot with a silk web and frass at the base. 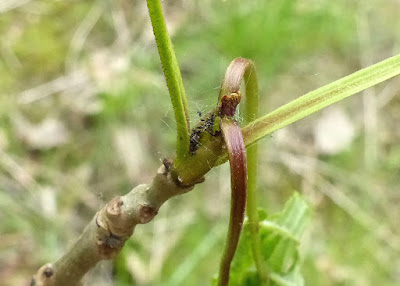 22.002 Ash Bud Moth (Prays fraxinella), a close-up of the feeding signs described above. This one's tenanted so I'll see if I can rear the larva through. 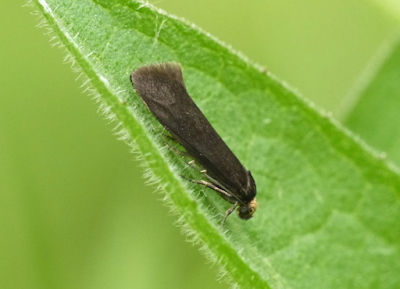 22.003 Dark Ash-bud Moth (Prays ruficeps) at the Calder near Milner Royd Nature Reserve on May 16th 2020. A field observation on knapweed. 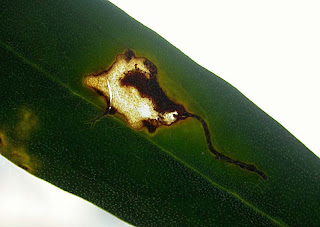 22.004 Olive Kernel Borer (Prays oleae), mine in an Olive tree, Newbank garden centre, West Vale, Apr. 19th 2012. Just one mine was found on half a dozen small trees. No doubt imported with the trees from warmer European climes. Not recorded in Britain until 2009. 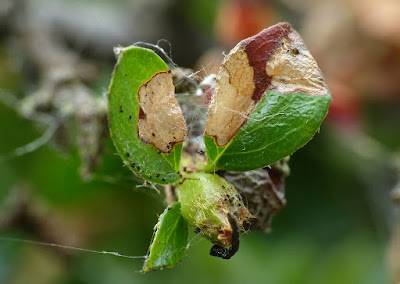 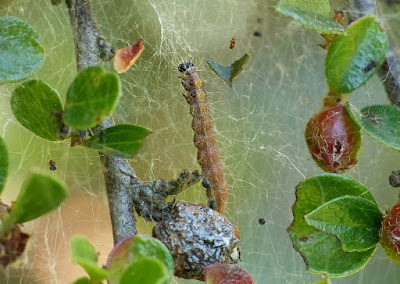 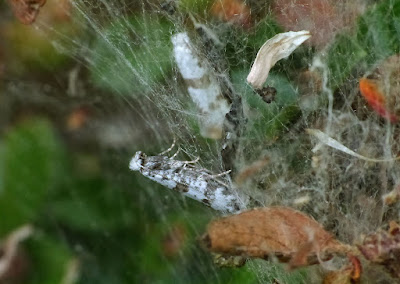 25.001 Hawthorn Moths emerging from the webbing on the garden Cotoneaster, June 21st 2017 (details as above). 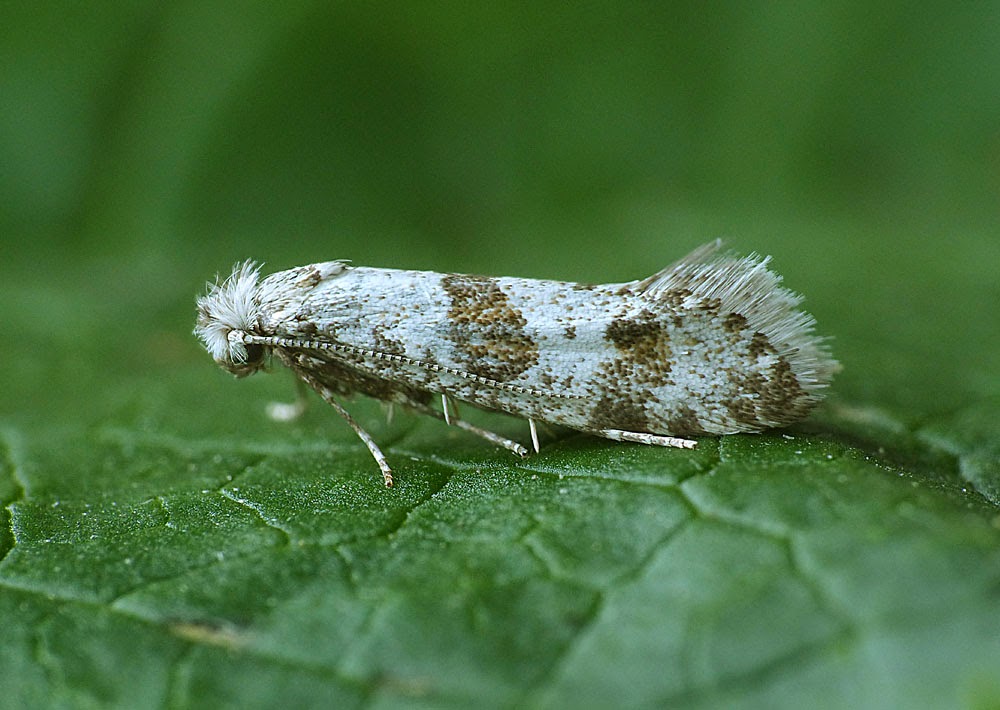 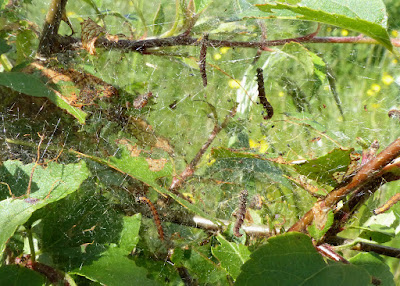 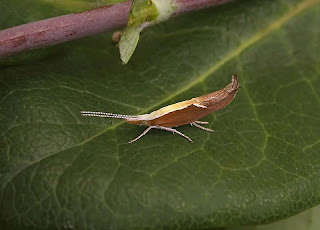 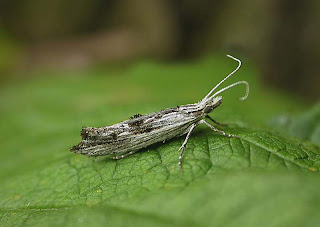 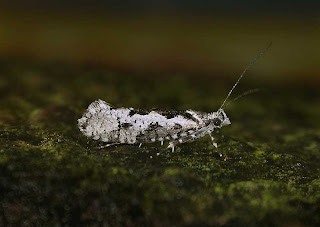 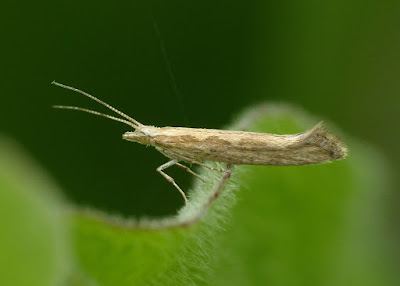 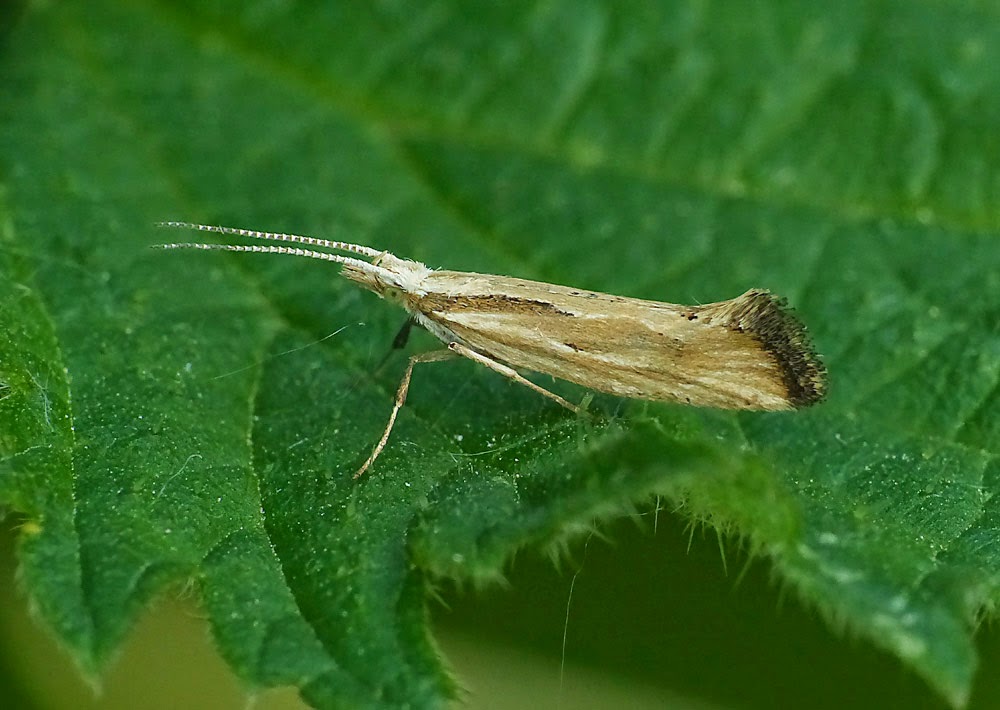 18.003 Grey-streaked Diamond-back (Plutella porectella) at the former sewage works at West Vale, May 21st 2014. A field observation on Common Nettle. Considering the large amount of the moth's foodplant, Dame's Violet, growing on the site it's not surprising to find this species here.