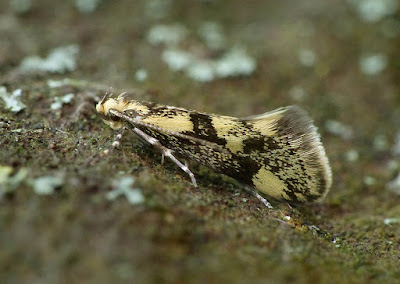 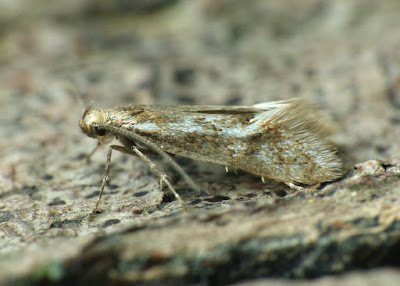 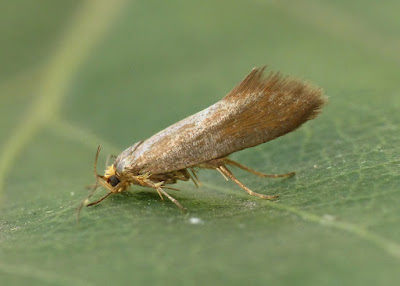 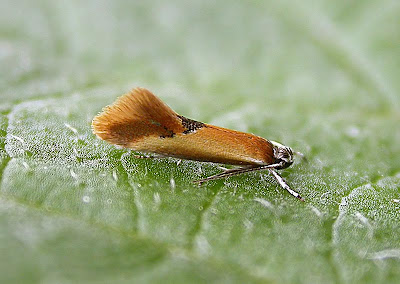 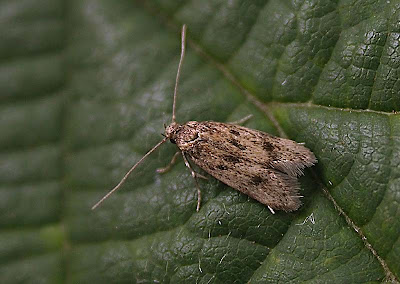 28.012 Small Dingy Tubic (Borkhausenia fuscescens) in the garden, Aug. 7th 2010. Captured by day. This is a smaller version of the Brown House Moth with a wingspan of around 10mm. 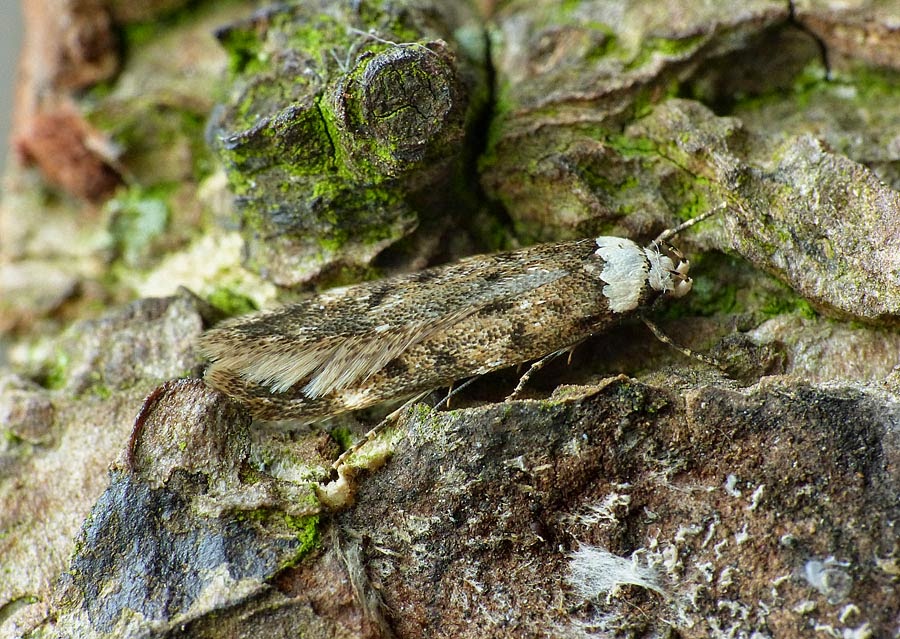 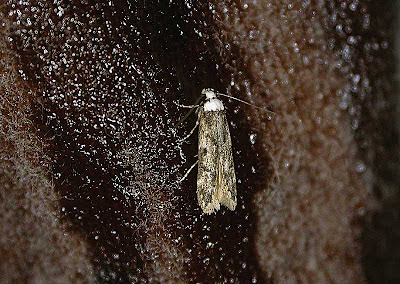 28.009 White-shouldered House Moth in the garden, Sept. 17th 06. Photographed at dusk feeding on a wine rope. One of my very few successes using this method, the notable exception being a Vestal five days earlier. 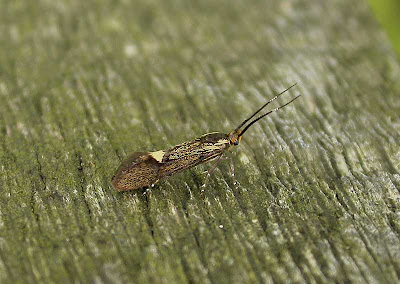 28.019 Sulphur Tubic (Esperia sulphurella) by the towpath at Elland, May 3rd 05. A field observation. A small group were seen flying over some old lock gates that had been left on the side of the towpath by British Waterways. The larvae feed on dead wood hence the attraction to the decaying timber. 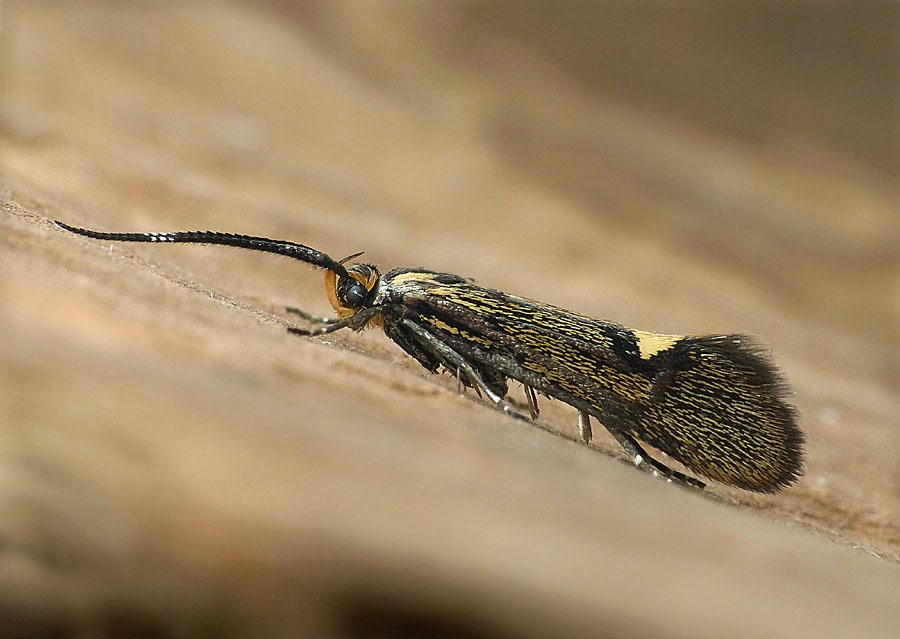 28.019 Sulphur Tubic (Esperia sulphurella), Skircoat Green allotments, Apr. 29th 2014, captured by day. Every year I get one or two either buzzing around the log pile on the plot or becoming trapped in the adjacent water butt. 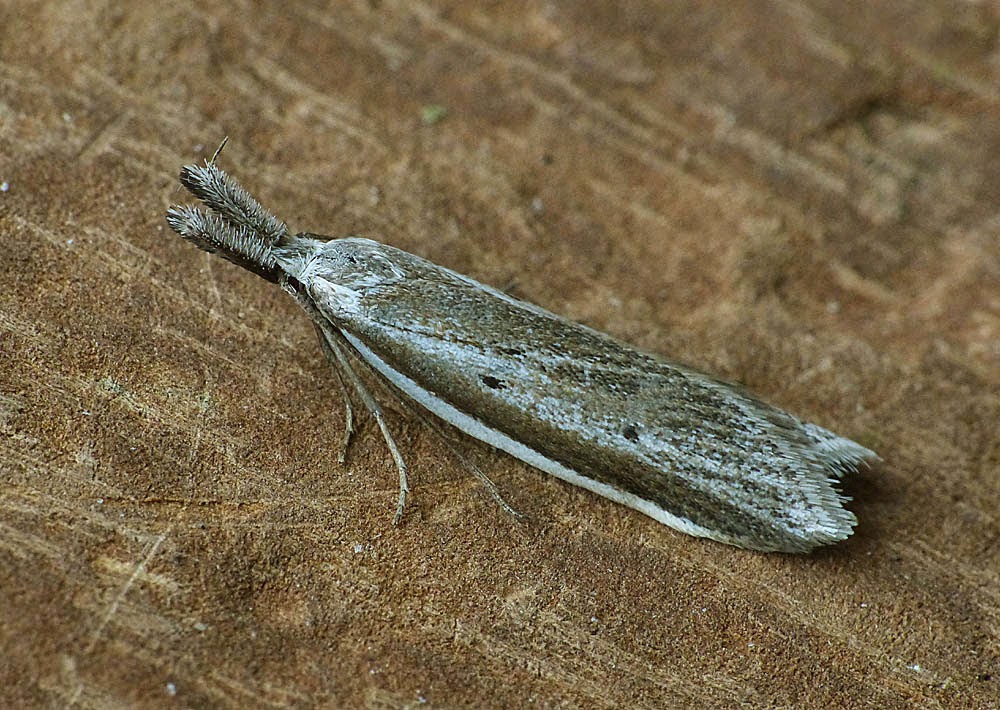 28.025 Light Streak (Pleurota bicostella), June 14th 2014. Not one of my finds but one of Andy Cockroft's who captured it the previous day near Withens clough. He kindly dropped it off for me to have a look at and take some photos. 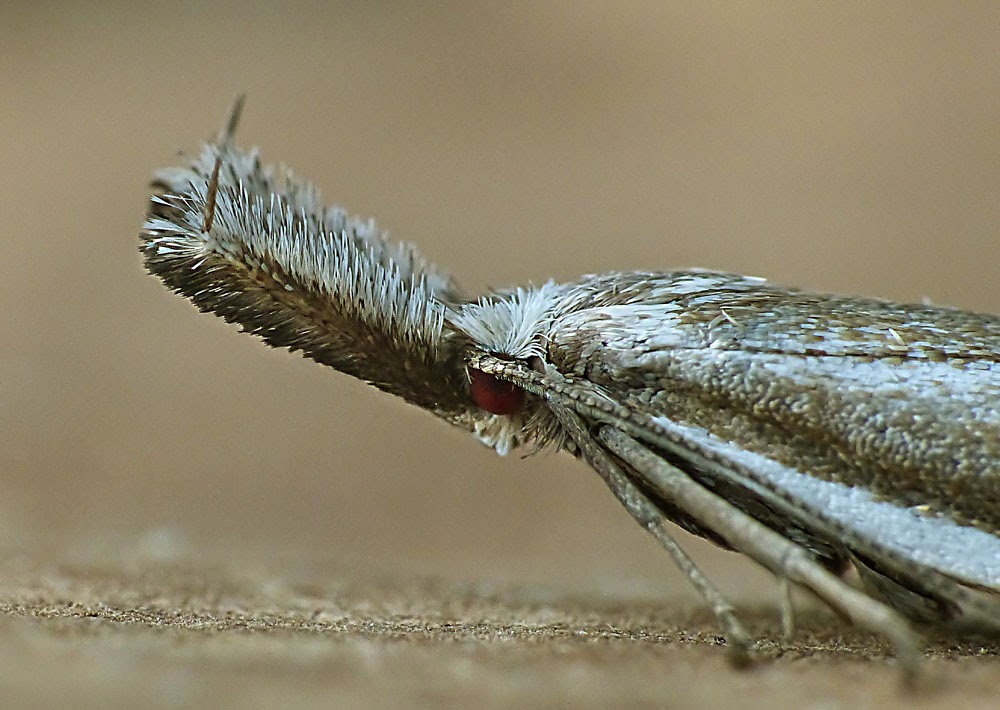 28.025 Light Streak (Pleurota bicostella), June 14th 2014. Same moth as above with some close-up detail of the enormous labial palps with the last segment erect and bristle-like. 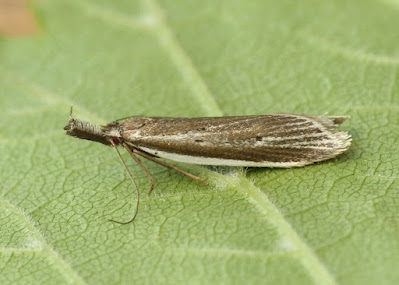 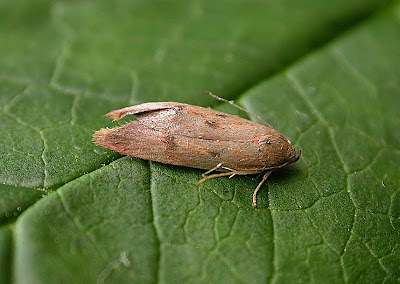 28.024 Ruddy Streak (Tachystola acroxantha), Skircoat Green allotments (floating in the water tub), June 25th 2012. A worn specimen but still showing quite a few pinkish/brown scales on the forewing, a concave termen and some reddish colouring to the fringe on the outer third of the costa. Only the second record for Yorkshire about a month after the first. 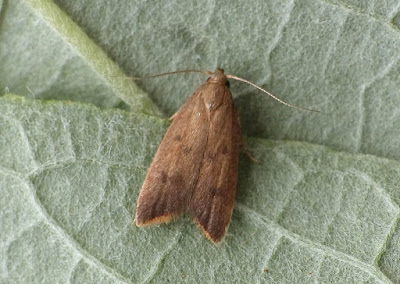 28.024 Ruddy Streak (Tachystola acroxantha), rescued from the garden water tub, Aug. 9th 2016. This once rare species is gradually gaining a foothold in Calderdale with multiple sightings each year. 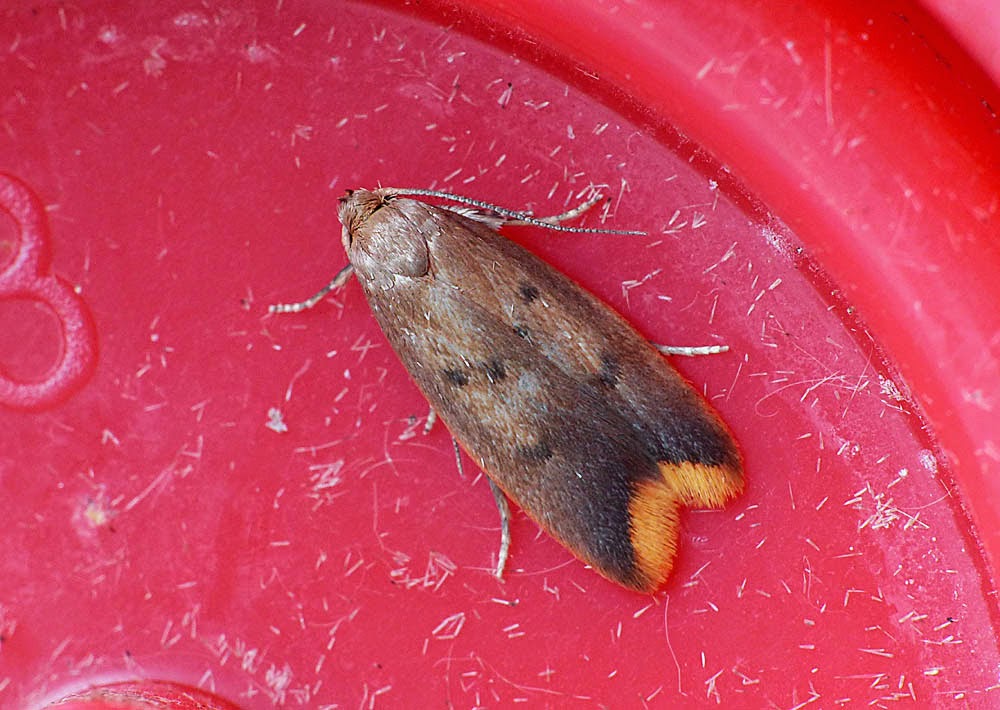 28.024 Ruddy Streak (Tachystola acroxantha), July 19th 2014. After news of a possible second moth turning up locally I headed off to Sean Johnston's place in the Heath area of Halifax to investigate. He runs a MV trap surrounded by large gardens containing plenty of mature trees and regularly gets decent hauls which last night included this rather fresh looking specimen. 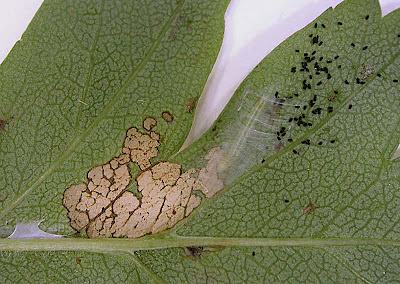 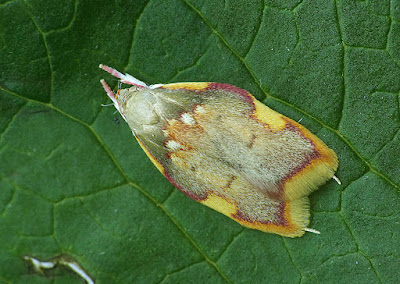 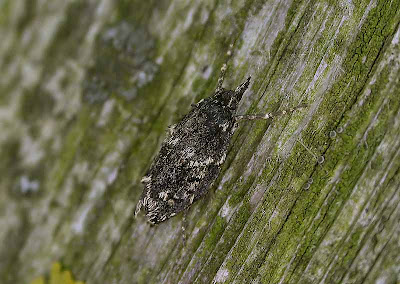 29.001 March Tubic (Diurnea fagella) - female, North Dean wood, Apr. 21st 09. A field observation on a fence post. The female has quite stunted wings and is only capable of (weak?) flight. 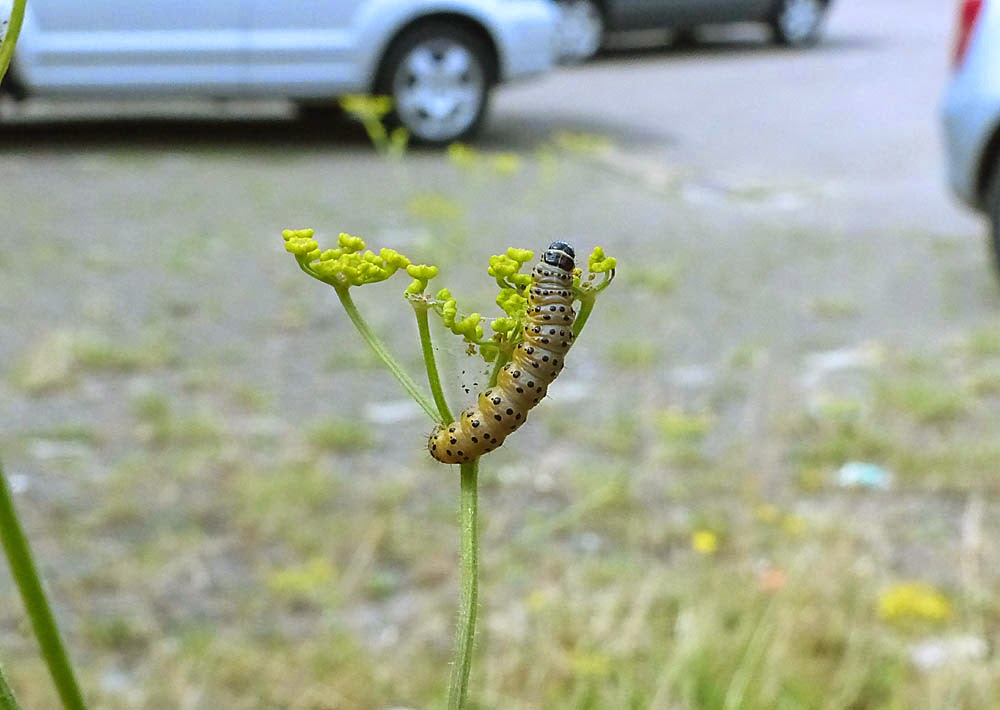 32.036 Parsnip Moth (Depressaria radiella) larva on Wild Parsnip at Walton Street car park, Sowerby Bridge, July 28th 2014. There were several plants present all of which had larvae feeding on them. Most had had their flower heads eaten off leaving behind many stalks with larval spinnings at the end. Thanks to botanist Peachy Steve for originally finding them. 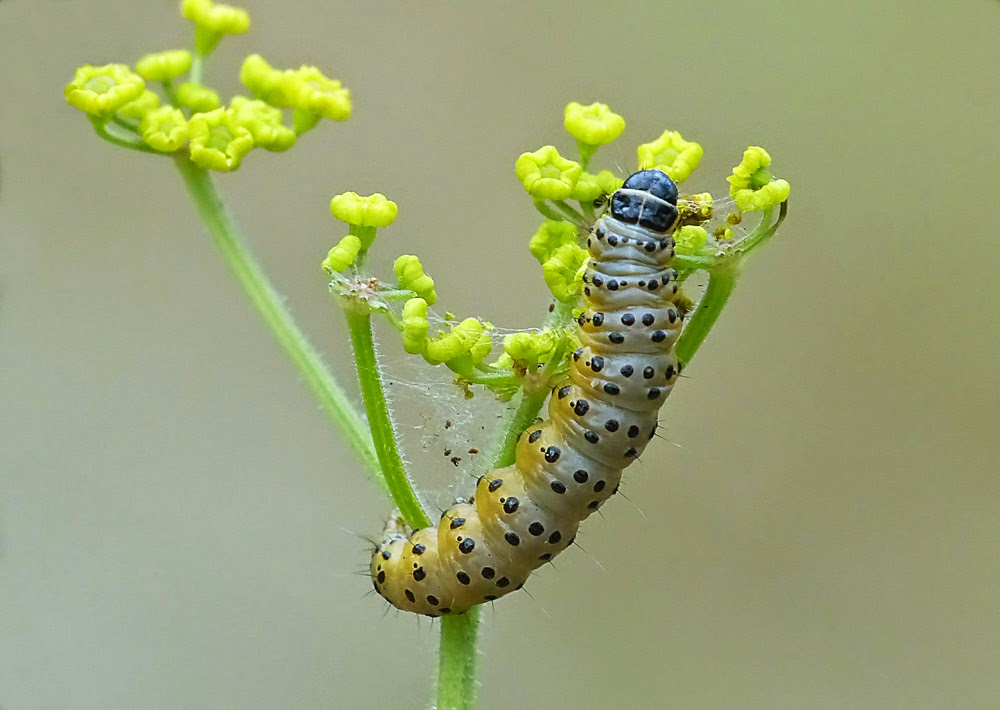 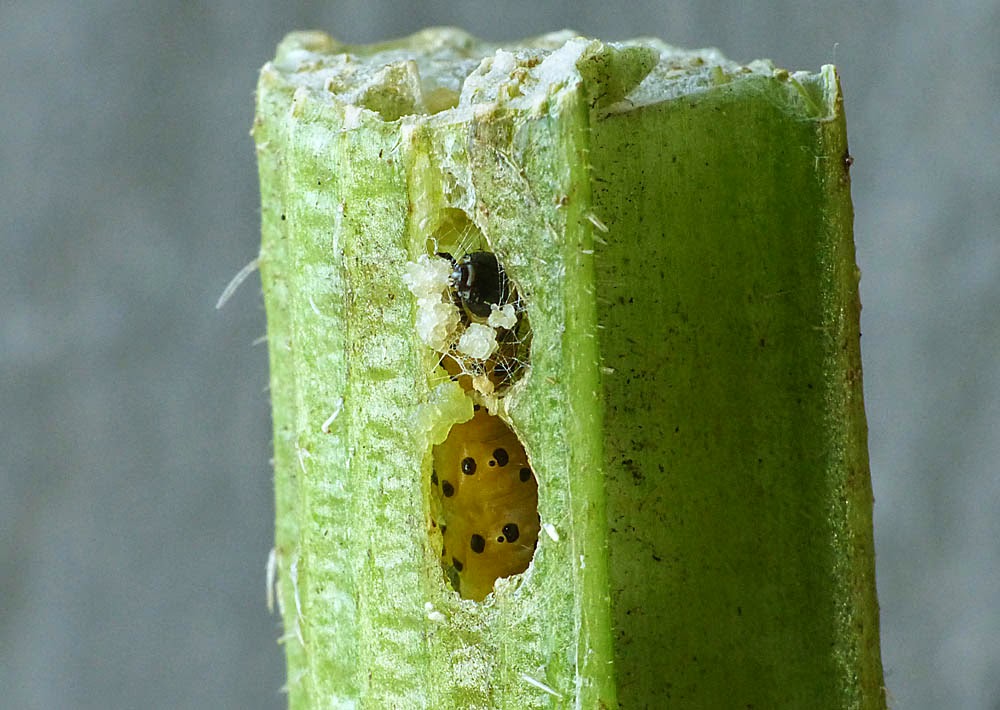 32.036 Parsnip Moth (Depressaria radiella) larva sealing the tunnnel entance, July 29th 2014. Knowing that these larvae would need an umbellifer stem to tunnel in to to pupate I had the foresight to take a Hogweed stem home and place a short section in with each of the feeding larvae. By day two all had fed up and had started to chew their way in to the Hogweed stem and begun to seal the entrances with chewed pith and a light silk spinning. 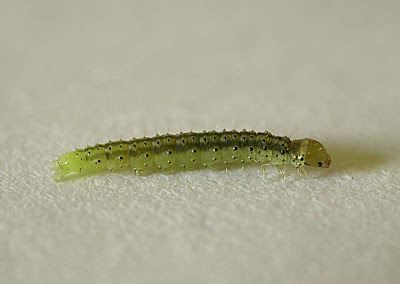 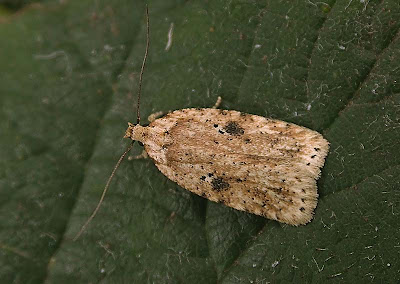 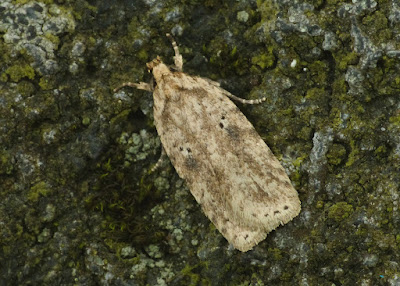 32.017 Brindled Flat-body (Agonopterix arenella) to MV light at Norland moor on Sept. 10th 2021. As with many moths that night they failed to enter the trap and were subsequently found nearby the following morning in the Heather, Bilberry etc. 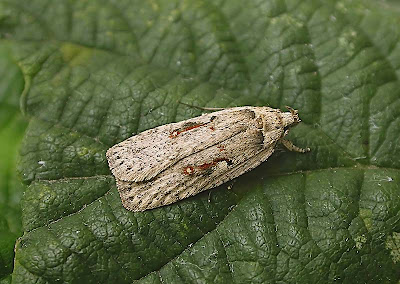 32.007 Red-letter Flat-body (Agonopterix ocellana), July 25th 2010. Reared from a larva inadvertently collected from Goat Willow by the towpath at Salterhebble earlier in the summer.
It was a nice surprise when it emerged as I had no idea that it was this species. This now made it four agonopterix species reared in the year, plus another one found, (A.arenella above). 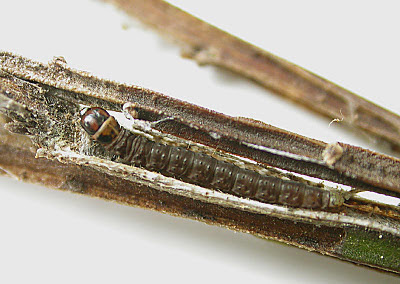 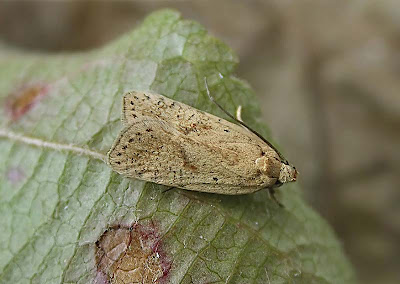 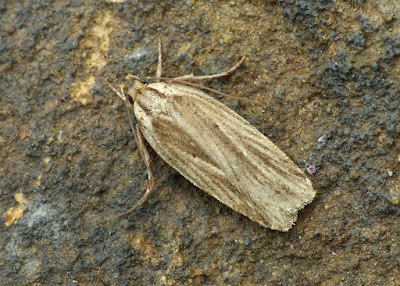 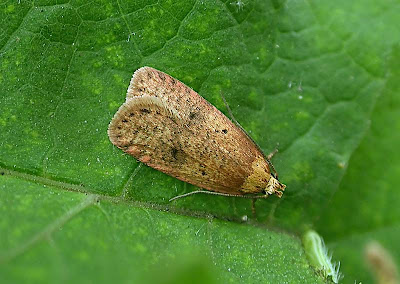