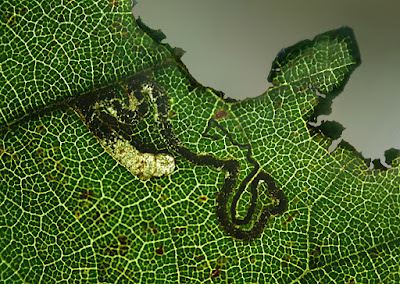 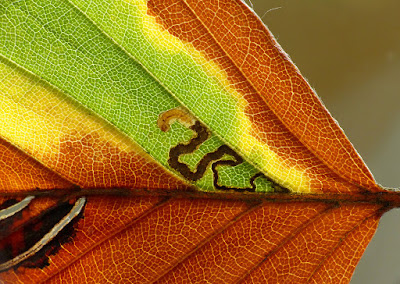 4.034 Small Beech Pygmy (Stigmella tityrella) mine and larva in Beech at North Dean wood, Oct. 15th 2017. The larva typically mines between the veins unlike S.hemargyrella. 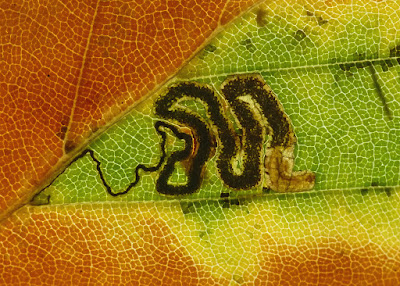 4.034 Small Beech Pygmy (Stigmella tityrella) larva and green island mine in Beech at Ogden Water on Oct. 16th 2021. No coiled frass anywhere in the mine. 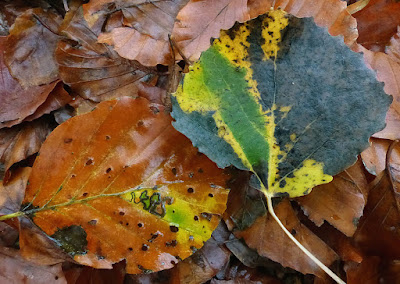 4.034 Small Beech Pygmy (Stigmella tityrella) mine in Beech alongside Ectoedemia argyropeza in Aspen at Exley Bank wood, Siddal on Nov. 20th 2016. Two examples of the "green island" effect caused by feeding larvae to keep the leaves edible even after they've fallen. 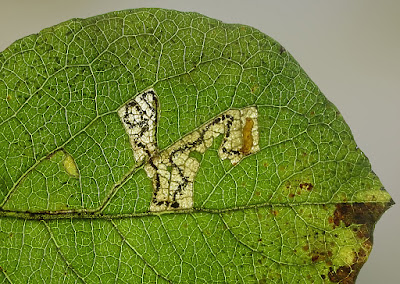 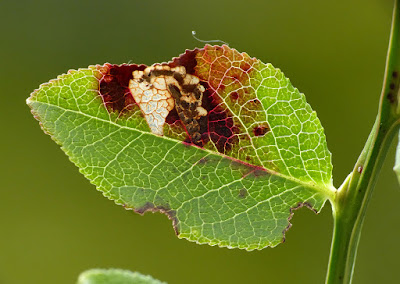 4.036 Bilberry Pygmy (Stigmella myrtillella) mine on Bilberry at a bridle path at Norland village, Aug. 13th 2017.
I've spent quite a while over the years searching for this miner after Paul Talbot had so much success finding mines at several sites around Calderdale. Finally, after a walk up to Norland village on a glorious summer's day I came across this one in among the countless, fungal infected Bilberry leaves. As Paul rightly said, it's best searched for on south or south-east facing slopes. 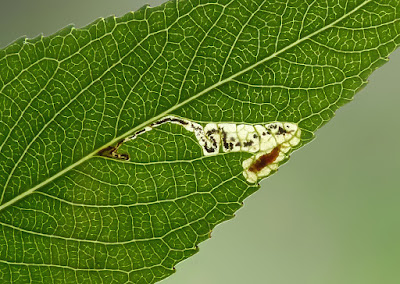 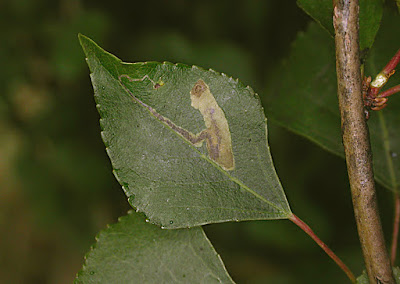 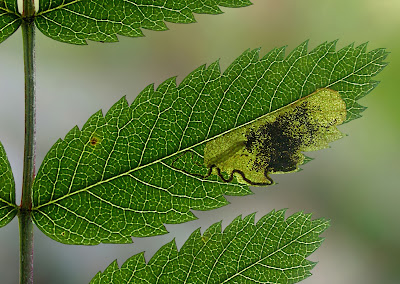 4.041 Barred Rowan Pygmy (Stigmella sorbi) mine and larva in Rowan, North Dean wood, June 22nd 09. Easily told from other mines on Rowan by the initial gallery suddenly widening to a blotch. 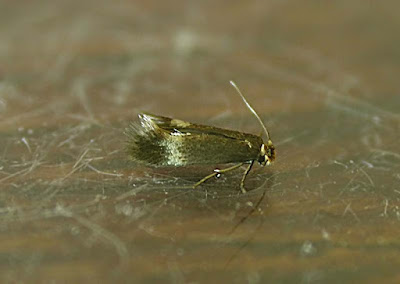 4.041 Barred Rowan Pygmy (Stigmella sorbi), Norland Bilberry slopes, Apr.9th 2011. One of two captured by day as they flew in the mid-morning sunshine. Thanks to Harry Beaumont for checking this one out. 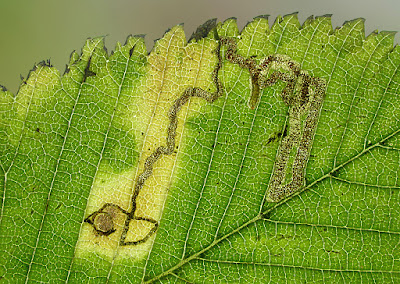 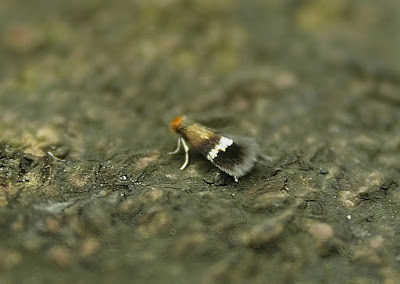 4.043 Red Elm Pygmy (Stigmella lemniscella), Apr.16th 2011. Reared from mines in Wych Elm found at Bankhouse wood the previous October. Frustratingly this one wouldn't stay still long enough for a decent shot and when Stigmellas   take flight they can easily disappear in to the tiniest of nooks and crannies (or just in to the ether it seems!). It's always a worry that you can so easily lose one that you've just spent 6 months rearing. 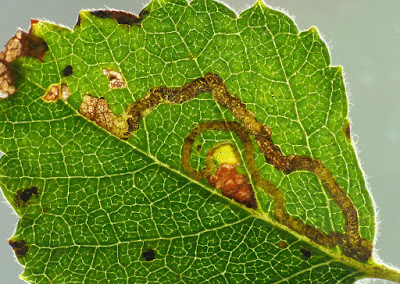 4.044 Double-barred Pygmy (Stigmella continuella) in Downy Birch, Norland Bilberry slopes, Sept. 27th 2017. Note the "dead blob" start to the mine and the green/brown frass completely filling the mine. 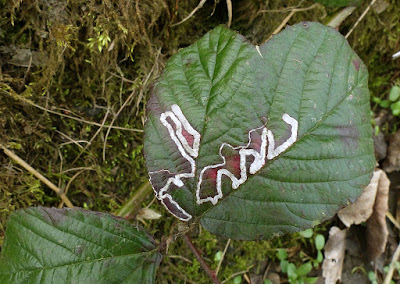 4.045 Golden Pygmy (Stigmella aurella)  mines in Bramble by the towpath above Cromwell Bottom on Feb. 22nd 2016. A common but often photogenic mine. 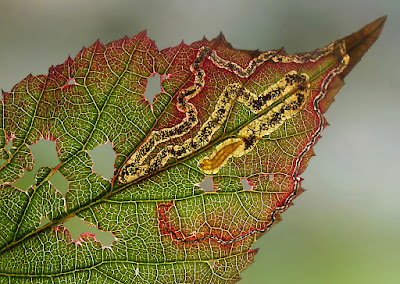 4.045 Golden Pygmy (Stigmella aurella)  mine and larva in bramble, North Loop, Feb.11th 09. Found on a cold, wet, miserable day but the rewards a month later were worth it (see two pics. down). 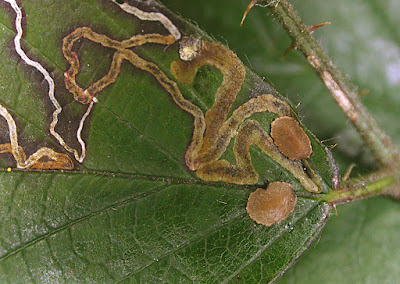 4.045 Golden Pygmy (Stigmella aurella)  mines and cocoons on bramble, Apr.10th 09. Found in North Dean wood. When rearing stigmellas it's worth checking the leaves after the larvae have vacated the mines to make sure they haven't pupated on them instead of the substrate provided. 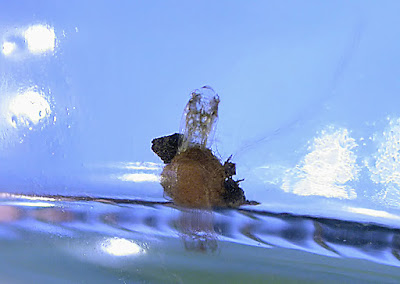 4.045 Golden Pygmy (Stigmella aurella) cocoon and empty pupal case, Mar.11th 09. A fantastic sight which immediately indicated that my first attempt at rearing a Stigmella species had been successful. Reared from the mine above found at North Loop. 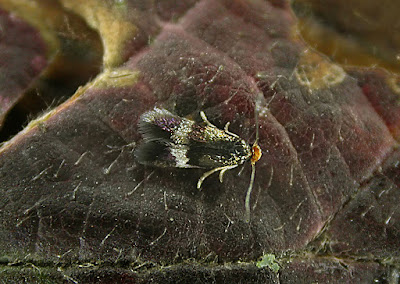 4.045 Golden Pygmy (Stigmella aurella)  Mar.11th 09. Emerged from the pupa pictured above. At 3mm long it looks nothing more than a tiny black fly in flight but in close-up it has a lovely metallic sheen with a variety of colours. 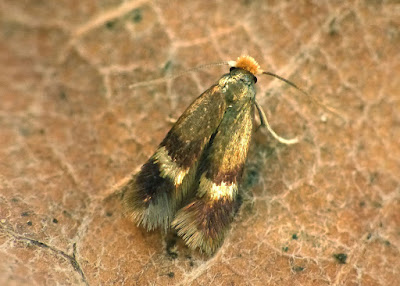 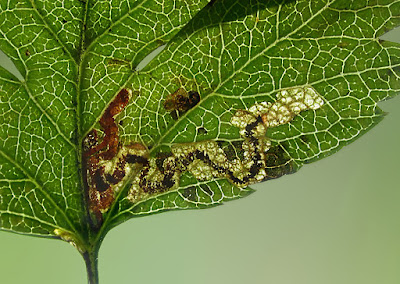 4.054 Least Thorn Pygmy (Stigmella perpygmaeella) a vacated mine in Hawthorn, New Lane, Sept.23rd 09. The diagnostic yellow larva with a pale brown head was observed under a microscope chewing out an exit hole and vacating the mine. This is the only time I have witnessed this behaviour. 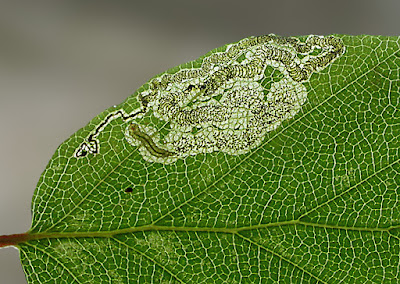 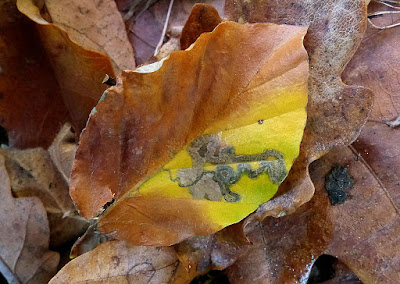 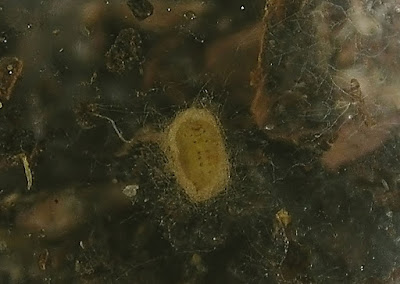 4.055 Beech Pygmy (Stigmella hemargyrella) cocoon spun on the side of the rearing jar, June 12th 09. Reared from mines in Beech found at North Dean wood earlier that summer. 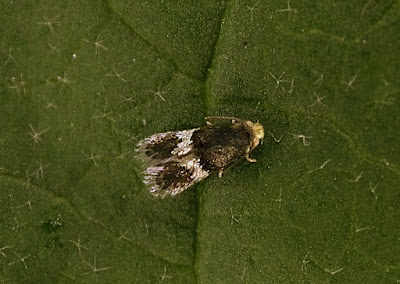