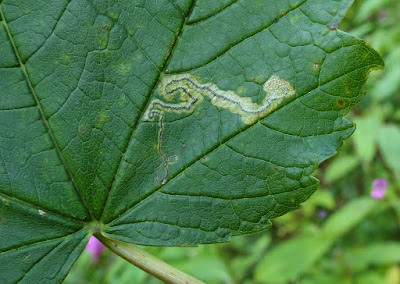 4.056 Barred Sycamore Pygmy (Stigmella speciosa) mine in Sycamore by the towpath above Cromwell Bottom, Aug. 10th 2017. 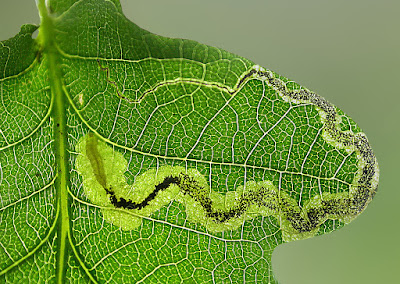 4.060 Red-headed Pygmy (Stigmella ruficapitella) mine and larva in oak by the Calder at Milner Royd, Sept. 4th 08. 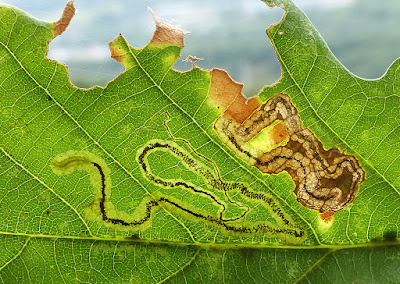 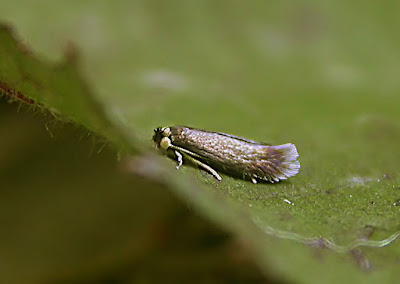 4.060 Red-headed Pygmy (Stigmella ruficapitella)(male), Apr.1st 2010. Reared from mines found near Norland village the previous autumn. Similar to other oak feeding stigmellas this one needed to be identified by microscopic examination of the hindwing (see below). 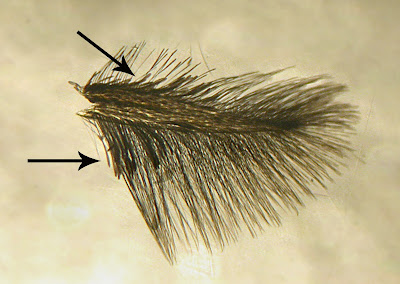 4.060 Red-headed Pygmy (Stigmella ruficapitella) - male, hindwing, Apr.2nd 2010. The short, dark, thick, hair-like scales (arrowed) are the androconial scales. They are present in the males only and release pheromones so the females can decide with which one to mate with. In this species they are around one third the length of the fringe. 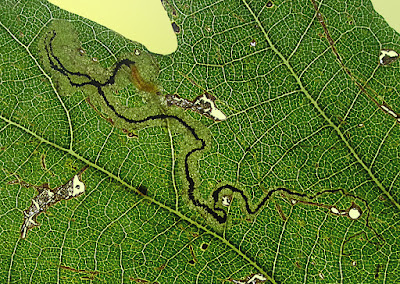 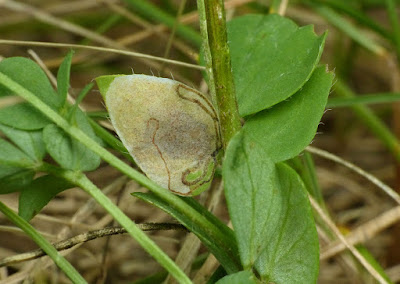 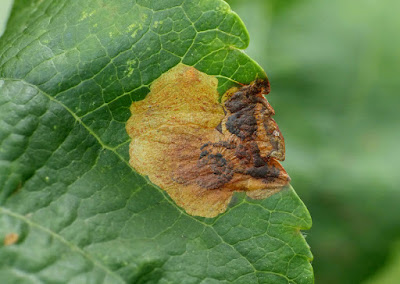 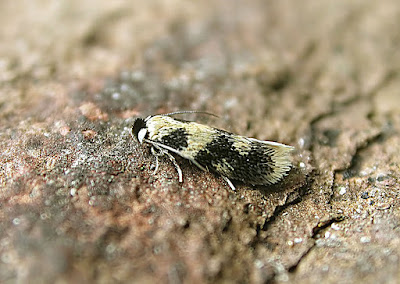 4.076 Sycamore-seed Pygmy (Ectoedemia decentella), on my study window, June 7th 2011. Captured by day and a much sought after species. As the larvae supposedly mine the keys (seeds) of Sycamore I didn't hold out much hope of finding any of the mines so to find this adult with the minimum of effort was most unexpected. 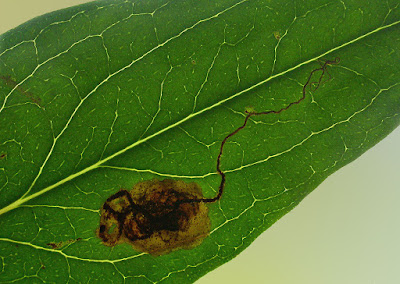 4.078 Hypericum Pygmy (Ectoedemia septembrella) mine in cultivated Hypericum, Skircoat Green, Aug.5th 2012. Having searched far and wide for wild St.John’s-wort I realised it exists in the cultivated form, Hypericum in several gardens close by and it wasn’t long before I found this mine. A nice long, thin gallery abruptly openeing out to a blotch. No adult to rear through this time as this larva had two ectoparasitoids attached! 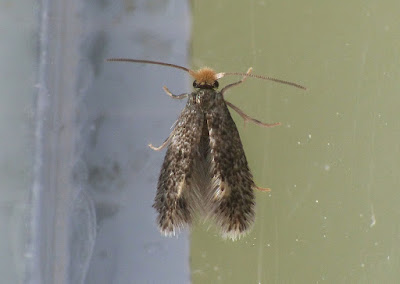 4.078 Hypericum Pygmy (Ectoedemia septembrella) above and below, found crawling up my bedroom window, May 18th 2018. 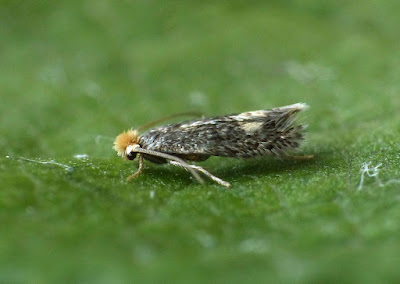 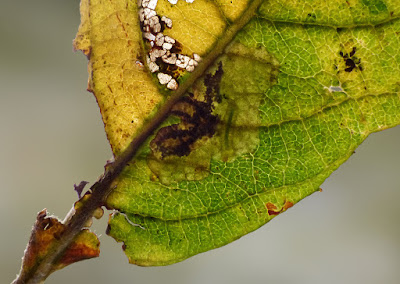 4.082 Black-spot Sallow Pygmy (Ectoedemia intimella), mine and larva on Grey Willow at Tag Loop, Cromwell Bottom LNR, Nov. 13th 2016. Note the mine running along the petiole before entering the leaf blade and also the twin lines of frass. 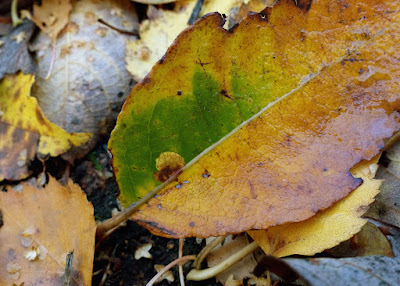 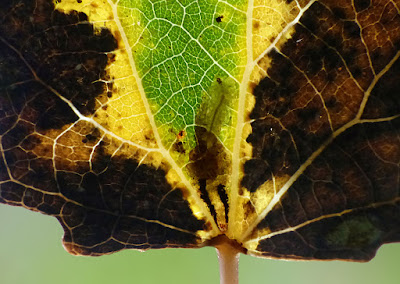 4.085 Virgin Pygmy (Ectoedemia argyropeza) a tenanted mine in Aspen, found at Exley Bank wood on Nov. 20th 2016. Despite only three Aspens present the mines were quite easy to find. 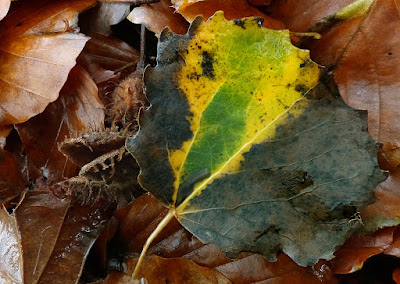 4.085 Virgin Pygmy (Ectoedemia argyropeza) a tenanted mine in Aspen, same leaf as above. 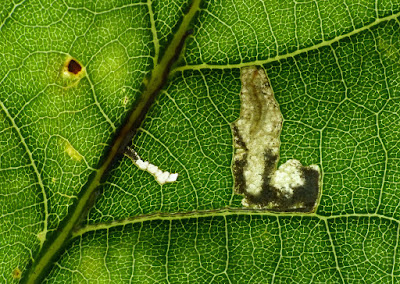 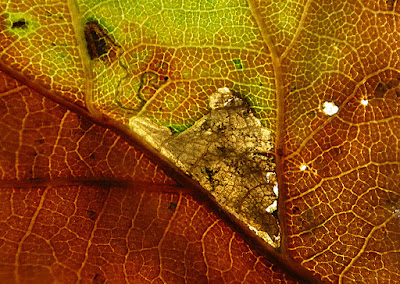 4.090 Spotted Black Pygmy (Ectoedemia subbimaculella) mine in oak, Bankhouse wood, Nov.26th 2010. The diagnostic V shaped slit is just visible against the midrib and vein which allows the frass to escape. This green island mine was found on the woodland floor amongst some early snowfall. 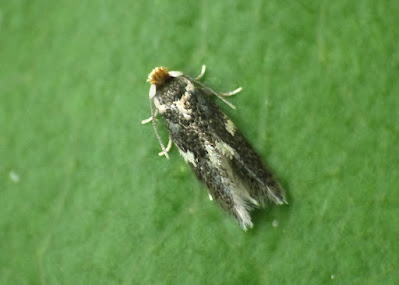 4.090 Spotted Black Pygmy (Ectoedemia subbimaculella), one of two found on oak at Crimsworth Dean near the war memorial on June 14th 2022. 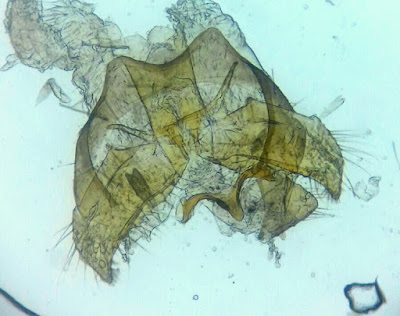 4.090 Spotted Black Pygmy (Ectoedemia subbimaculella) genetalia dissection of the moth pictured above. The moth was around 3mm long, so having already identified it I had a go at dissection just out of curiosity. I was pleasantly surprised when my "Picasso" attempt actually looked like what it was supposed to. 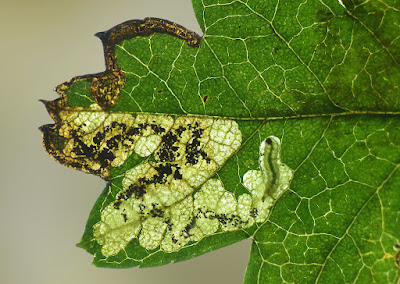 4.095 Pinch-barred Pygmy (Ectoedemia atricolis), larva and mine in Hawthorn, Bankhouse wood on Aug. 23rd 2017. A  typical Ectoedemia mine starting as a narrow gallery, in this case along the edge of the leaf, and then opening out in to a blotch. The dark head of the larva separates it from Stigmella hybnerella. 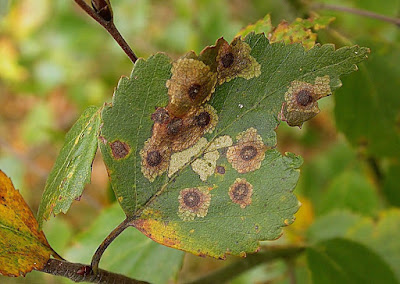 4.099 Large Birch Pygmy (Ectoedemia occultella), mines in Downy Birch, North Dean wood, Oct. 18th 2010. One of the most numerous mines I find. There are around a dozen, tenanted blotch mines on this one leaf alone. 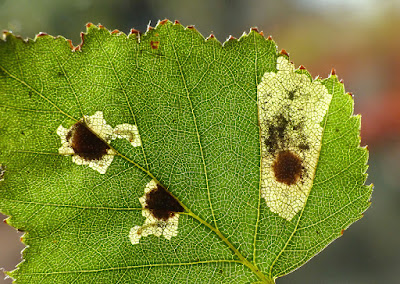 4.099 Large Birch Pygmy (Ectoedemia occultella), mines and larvae in birch at Tag meadow, Cromwell Bottom LNR, Oct. 16th 2018. The frass is concentrated in a blotch, often near the centre of the mine. The right hand mine is complete and vacated. 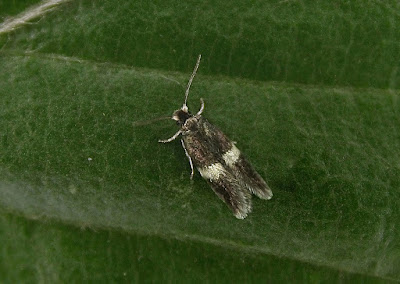 4.099 Large Birch Pygmy (Ectoedemia occultella), (male), North Dean wood, June 8th 09. Captured by day on a Beech trunk. Its identification was aided by advice from Nepticulid expert Erik van Nieukerken and the use of my microscope to examine the forewing scales. Note the eye-caps (scapes) which are modified antennal segments and are a distinctive feature of this family. They are white in the male of this species. 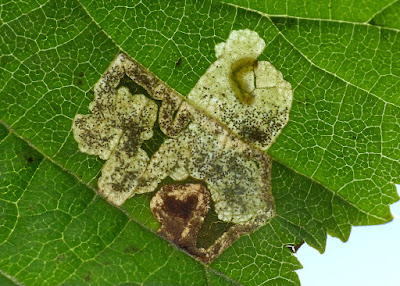